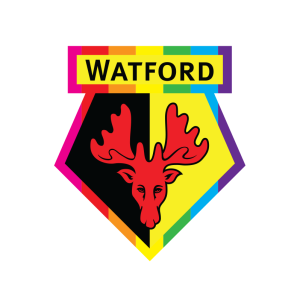 From The Rookery End Interview

On Saturday the 31st August 2019 it was Watford’s day to put itself in the limelight by representing the county celebrating Herts Pride. Walking down Cassiobury Park on a chilly late August day, brought back many a memory for me as a child. As a family, in the early 1970’s, we lived in Swiss Avenue (for those who don’t know where that is, it is about 10 minutes’ walk form the park and near Watford Met Station).

Whilst the park has changed over the years, it was a fantastic environment in which to host such an event as Herts Pride. Renovation of the paddling pool/café area took Herts pride to Hemel Hempstead for a couple of years’ whilst the work took place. However, this new pool is a vast improvement to the algae infested version that I can clearly remember encountering at the age of 7 and has clearly made the park a great space for the community to enjoy.

The committee of Herts Pride do a fantastic task in staging these events and the event itself seems to get more popular each year. A reality check though … while is it has only being going for 6 years, it’s a pity from my point of view, of the clear lack of support from other organisations within the town.

As I walked down the high street on Friday evening, there didn’t seem to be one single shop visibly displaying any rainbow flags. I am not sure whose fault that is, (if there is anyone to blame), but it is the old adage, people moan and then when you then ask them to do something about it, they hide away with excuses and won’t participate. Perhaps the local Chamber of Commerce and Watford Borough Council need to consider this for next year’s event. I am not sure what the answer is though and I don’t want to take anything away from what was a brilliant weekend.

Herts Pride started for us with the ‘Pre-Party’ at the One-Crown in Watford High Street. It did start off quietly, but seemed to me get busier and louder as the evening wore on, probably through the combination of the drinks and people shouting to hear themselves over the music. It was fantastically hosted by Stephanie Von Clitellum, who managed to drag our very own Callum Jewells onto the dance floor. As Stephanie did her best to try and attempt Callum to dance and sing, the ear plugs and the camera phone were at the ready.

A lot of work is undertaken by all various participating organisations into holding the Herts pride event and Proud Hornets are very thankful for the support including: Sarah Priestly and her team from Watford Museum and Watford FC Community Trust for partnering us on this special day. Peter Wilton again from our group did a sterling job in pulling and bringing things together for the day. Sarah Priestly and her team and our Kelly Neilson showed the art of how to put up the bunting, including to correct way of using sticky and gaffer tape shaping how our area looked:

The day itself started slowly as a representative of Three Rivers District council Sara Bedford opened the event with a poignant speech to include comments such as: “that whilst strides have been made towards tackling homophobia, and that holding hands no matter who you love should be as acceptable as it is for straight people, the current atmosphere towards Transgender people is not acceptable and work on this needs to be tackled”.

However, as the event started to get busier, a real buzz developed; our Proud ‘T’ shirts were selling well as was the interest in the history of Cassiobury Park House demolished in 1927. Information on the Park, which now has houses built on it, was interestingly presented by Sarah and her team.

There was interest too in the Elton John costume warn and made for Elton in 1984 though discussions were had by the group on which concert he wore it, but no agreement could be met.

Our youngest member Ewan Neilson was showing his footballing skills with the members of Watford FC Community Trust as he had just come from a football training session with his father and fellow member Stuart. A mini competition with the handsome members of the Fire brigade and Herts Police was held to drum up other interest, resulting in much laughter, which encouraged others to patriciate.

As the evening came in and the darkness fell, it was quite sad in a way for the day to end. The evening was well wrapped up be excellent performances including Rozalla on the main stage. We then trekked through the darkness, using our torches on our phones to the ‘After Party’ at the Escort Tavern which somehow ended up like the photo below:

We really enjoyed the day and we look forward to next years Herts Pride.